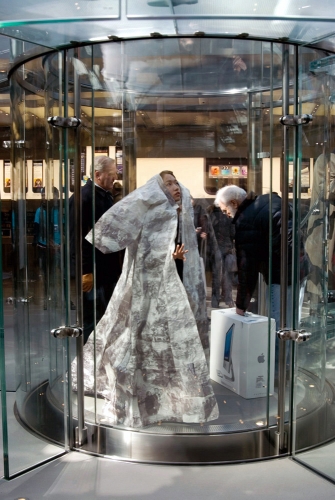 "For years, I have dreamed of a utopia where my past and present, as well as fantasy and reality, are integrated while maintaining a nomadic life style. In my works, I embody the concept of my ideal place and state of mind by using flexible fabrics and paper that are easy to carry and work with while relocating".

Korean-born and New York-based visual artist Suyeon Na investigates the fluidity of the self and the complexity of the world around her, by manipulating images sourced from newspaper, fashion magazines and patterns on the surface of fabrics we see every day. Na mines the imagery from fairytales, mythology, and Asian folklore which influenced her childhood, and combines them with the remnants of today’s world. In her work, the crystalline collages made with fabric, paper and sequins are mingled with watercolor-painted, mythological figures, often females and animals. While surrounded by lavish colors and textures, these characters quietly deliver psychological narrative about the issues of social and cultural adaptation, gender, love and intimacy.

Na received a BFA from Seoul National University and a MFA from Pratt Institute. Her work has been widely exhibited at numerous venues in the U.S., Korea, Japan and India, including  New York Foundation for the Arts, Context Art Miami, Scope New York, Chashama Gallery, the Brooklyn Public Central Library, Textile Arts Center and ISE Cultural Foundation in the U.S., the Seoul Arts Center and Uijeongbu Arts Center in Korea, the Studio Kura in Japan, and the Jawahar Kala Kendra Art Centre in India. She has been selected as a participant for the NYFA Immigrant Artist Mentoring Program and awarded artist grants and studio spaces from the Vermont Studio Center, Chashama Visual Arts Studio, and the Contemporary Artists Center. Na is currently an artist in residence of the Chashama Visual Arts Program in Brooklyn, New York.