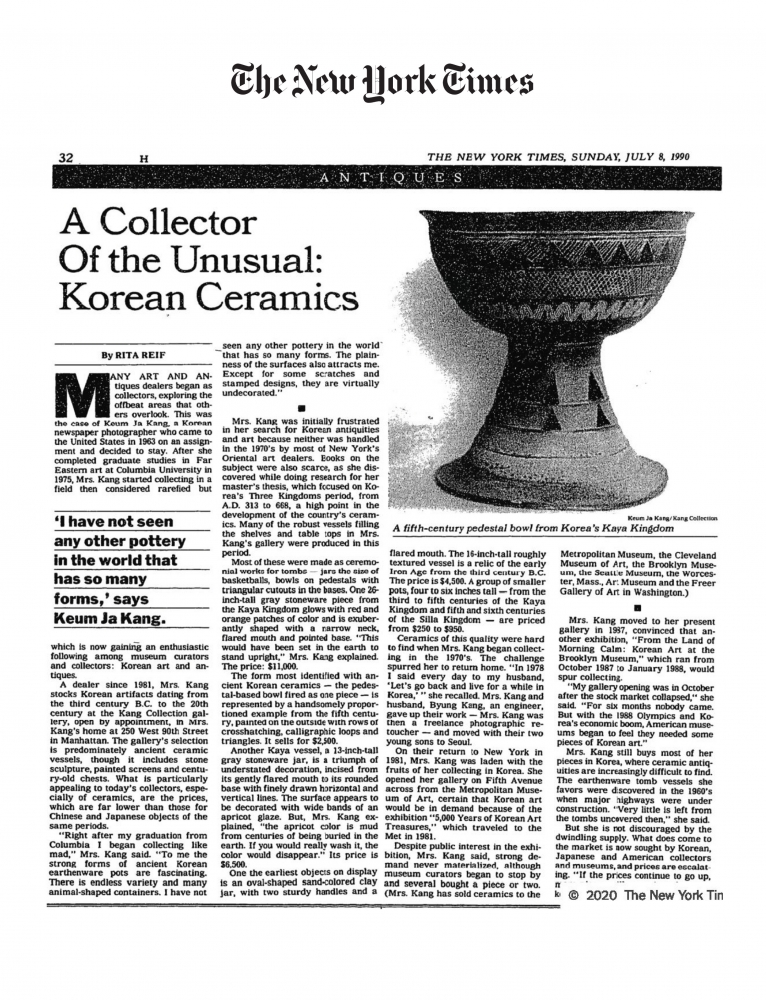 Many art and antiques dealers began as collectors, exploring the offbeat areas that others overlook. This was the case of Keum Ja Kang, a Korean newspaper photographer who came to the United States in 1963 on an assignment and decided to stay. After she completed graduate studies in Far Eastern art at Columbia University in 1975, Mrs. Kang started collecting in a field then considered rarefied but which is now gaining an enthusiastic following among museum curators and collectors: Korean art and antiques.

A dealer since 1981, Mrs. Kang stocks Korean artifacts dating from the third century B.C. to the 20th century at the Kang Collection gallery, open by appointment, in Mrs. Kang's home at 250 West 90th Street in Manhattan. The gallery's selection is predominately ancient ceramic vessels, though it includes stone sculpture, painted screens and century-old chests. What is particularly appealing to today's collectors, especially of ceramics, are the prices, which are far lower than those for Chinese and Japanese objects of the same periods.

''Right after my graduation from Columbia I began collecting like mad,'' Mrs. Kang said. ''To me the strong forms of ancient Korean earthenware pots are fascinating. There is endless variety and many animal-shaped containers. I have not seen any other pottery in the world that has so many forms. The plainness of the surfaces also attracts me. Except for some scratches and stamped designs, they are virtually undecorated.''

Mrs. Kang was initially frustrated in her search for Korean antiquities and art because neither was handled in the 1970's by most of New York's Oriental art dealers. Books on the subject were also scarce, as she discovered while doing research for her master's thesis, which focused on Korea's Three Kingdoms period, from A.D. 313 to 668, a high point in the development of the country's ceramics. Many of the robust vessels filling the shelves and table tops in Mrs. Kang's gallery were produced in this period.

Most of these were made as ceremonial works for tombs - jars the size of basketballs, bowls on pedestals with triangular cutouts in the bases. One 26-inch-tall gray stoneware piece from the Kaya Kingdom glows with red and orange patches of color and is exuberantly shaped with a narrow neck, flared mouth and pointed base. ''This would have been set in the earth to stand upright,'' Mrs. Kang explained. The price: $11,000.

The form most identified with ancient Korean ceramics - the pedestal-based bowl fired as one piece - is represented by a handsomely proportioned example from the fifth century, painted on the outside with rows of crosshatching, calligraphic loops and triangles. It sells for $2,500.

Another Kaya vessel, a 13-inch-tall gray stoneware jar, is a triumph of understated decoration, incised from its gently flared mouth to its rounded base with finely drawn horizontal and vertical lines. The surface appears to be decorated with wide bands of an apricot glaze. But, Mrs. Kang explained, ''the apricot color is mud from centuries of being buried in the earth. If you would really wash it, the color would disappear.'' Its price is $6,500.

One the earliest objects on display is an oval-shaped sand-colored clay jar, with two sturdy handles and a flared mouth. The 16-inch-tall roughly textured vessel is a relic of the early Iron Age from the third century B.C. The price is $4,500. A group of smaller pots, four to six inches tall - from the third to fifth centuries of the Kaya Kingdom and fifth and sixth centuries of the Silla Kingdom - are priced from $250 to $950.

Ceramics of this quality were hard to find when Mrs. Kang began collecting in the 1970's. The challenge spurred her to return home. ''In 1978 I said every day to my husband, 'Let's go back and live for a while in Korea,' '' she recalled. Mrs. Kang and husband, Byung Kang, an engineer, gave up their work - Mrs. Kang was then a freelance photographic retoucher - and moved with their two young sons to Seoul.

On their return to New York in 1981, Mrs. Kang was laden with the fruits of her collecting in Korea. She opened her gallery on Fifth Avenue across from the Metropolitan Museum of Art, certain that Korean art would be in demand because of the exhibition ''5,000 Years of Korean Art Treasures,'' which traveled to the Met in 1981.

Despite public interest in the exhibition, Mrs. Kang said, strong demand never materialized, although museum curators began to stop by and several bought a piece or two. (Mrs. Kang has sold ceramics to the Metropolitan Museum, the Cleveland Museum of Art, the Brooklyn Museum, the Seattle Museum, the Worcester, Mass., Art Museum and the Freer Gallery of Art in Washington.) Mrs. Kang moved to her present gallery in 1987, convinced that another exhibition, ''From the Land of Morning Calm: Korean Art at the Brooklyn Museum,'' which ran from October 1987 to January 1988, would spur collecting.

''My gallery opening was in October after the stock market collapsed,'' she said. ''For six months nobody came. But with the 1988 Olympics and Korea's economic boom, American museums began to feel they needed some pieces of Korean art.''

Mrs. Kang still buys most of her pieces in Korea, where ceramic antiquities are increasingly difficult to find. The earthenware tomb vessels she favors were discovered in the 1960's when major highways were under construction. ''Very little is left from the tombs uncovered then,'' she said.

But she is not discouraged by the dwindling supply. What does come to the market is now sought by Korean, Japanese and American collectors and museums, and prices are escalating. ''If the prices continue to go up, more pieces will come into the market,'' she said.