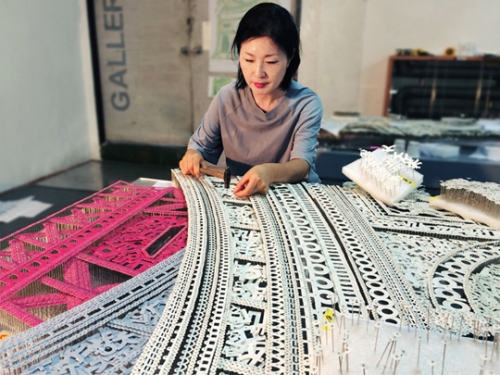 Born in the Republic of Korea in 1960, Ran Hwang currently lives and works in both Seoul and New York City. She studied at the School of Visual Arts in New York City and attended the Graduate School of Fine Arts at Chung-Ang University in Seoul.

Hwang’s motifs of intricate blossoms and Buddha’s – which appear across a variety of media – stem from her fascination with Zen Buddhism. Buddhism is integral to Hwang’s creative process and labor-intensive execution. To construct much of her work, Hwang creates paper buttons by hand, hammering each one approximately twenty-five times until it is secure. Her process requires the utmost concentration and discipline, recalling the meditative state practiced by Zen masters.